The Government Conference Centre is an elegant building located on the Rideau Canal in Ottawa, just across the street from the Chateau Laurier.

The Beaux-Arts building was completed in 1912 and originally used as Ottawa's main train station.  Train tracks once ran along the east side of the canal through the station and across the Alexandra Bridge to the Province of Quebec. 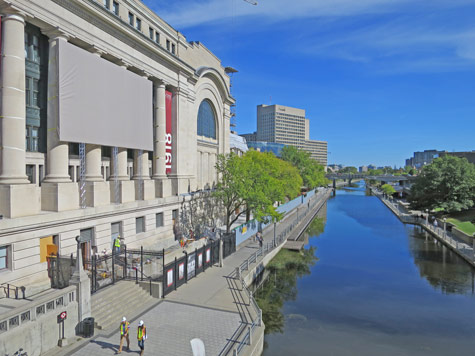 In 1966, the National Capital Commission made a decision to build a new train station south of Ottawa.  The tracks that ran along the canal were removed and replaced by a picturesque walkway.

The building was transformed into the current Government Conference Centre.  Among other major events, it hosted the G20 Conference in 2001.